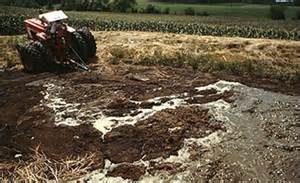 A manure storage pond, being agitated

Confined Animal Feeding Operations (CAFO) became normal in the 21st century.  Before CAFO’s came to be, a farm’s manure was handled as a solid, and piled until it was hauled to a field.  If not hauled away in early spring, it had associated problems such as flies, odor, rodents, runoff, etc.   During summer, cattle were sent to pasture, where they walked away from their manure and urine.  Pasturing allowed a natural manure distribution process which let both aerobic and anaerobic bacteria consume the cow pies and urine.

When CAFO’s started,  the animals were much too confined to allow them to walk away from their manure and urine.      Manure storage and handling became more and more intense.  It became more of a problem and  headache.  Often, little regard was given for its fertilizer and nutrient value. It was simply a problem stored until it could be sent to fields.   (This isn’t a treatise in manure management, but an overall brief summary)

Most people can agree that Manure storage ponds stink badly:  Manure, urine, rainwater, and bedding flow into them. Although nature is good at decomposing things, decomposition doesn’t readily occur easily within a pond designed solely for “storage”.

Manure ponds need to be emptied frequently, often twice a year, lest they become too full and run over.  But, a farmer doesn’t just  “empty” a storage pond: The pond needs to be “agitated” beforehand to re-suspend settled solids back into the liquid effluent, so the solids don’t build up and reduce storage capacity.  Agitation requires several tractors attached to long necked pumps be brought to the pond, running for days/weeks at a time, to stir the pond up. 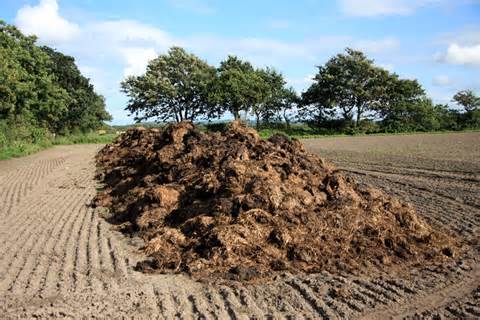 Manure piled in a farm field

Although the pond has an odor most of the time, when agitation occurs, it stinks horridly, since all the stored gasses are now released.   It can stink for weeks,  depending on how long the agitation is required to merge the solids with the top liquid.   It smells for miles around.  Ammonia, hydrogen sulfide, and other gasses readily escape and pollute the neighborhood air.

In many cases, soon after agitation, a hired company shows up, and they either tanker haul the manure, or pump it through a long hose to a nearby field where the manure is sprayed onto or knifed into the farm ground.   The hired company is on a tight schedule, so distribution often occurs rain or shine, and potential runoff issues can occur.

The heaviest odor problems are when agitation occurs, and also when it is moved to the field.

Yet, on a daily basis, even without their agitation, these ponds stink.   Some “manage” the daily odors by letting the straw (bedding used for cows) accumulate on the top of the pond, making a “cap” form on the pond.   This cap is destroyed during agitation, releasing the odors that accumulated during the storage period.

Some farms use the pondwater to “flush” some of their manure gathering channels within the barn.   If the pond is not aerated, the pondwater is often very smelly.   This is a better choice than other options:  It is not good business to flush manure gutters/alleys with fresh water, since fresh water flushing causes floors to become very slippery.      Dairies can lose their best cows to broken legs, displaced hips, or injured udders due to slippery floors.    They often chose the lesser of 2 evils:   Manure/urine laden floors are better than having slippery floors.  (Yet, Flushing with aerated pond water is unrivaled in cleaning dairy floors and alleys)

The SOLUTION to these problems:   Aeration can eliminate odors and eliminate solids buildup.  It is not yet common on manure ponds, but is a process who’s time has come.  Previous attempts of Aeration/Circulation equipment was somewhat successful in providing continuous agitation and circulation while recharging oxygen through the ever-changing surface activity, and did fairly well in making the pond be aerobic.Yet, for many of those inventions, maintenance requirements involved too much work, and the farmer tired of the work he had to do in his manure pond.    Farmers are always busy doing other things, and often abandoned the equipment after getting tired of trying to keep it running.  Even as smaller units were developed, each required heavy equipment (material handlers, cranes, boom trucks, etc.) to install/remove their equipment at the pond.

PondLift’s StinkSTOPpers and SSPs change this:  They are easily installed, moved and removed from the pond when needed.  And they do an exceptional job of bringing solids to the surface. They raise and spreading the lower water across the surface to aerate the entire pond.  They are designed purposely to be as maintenance-free as possible.